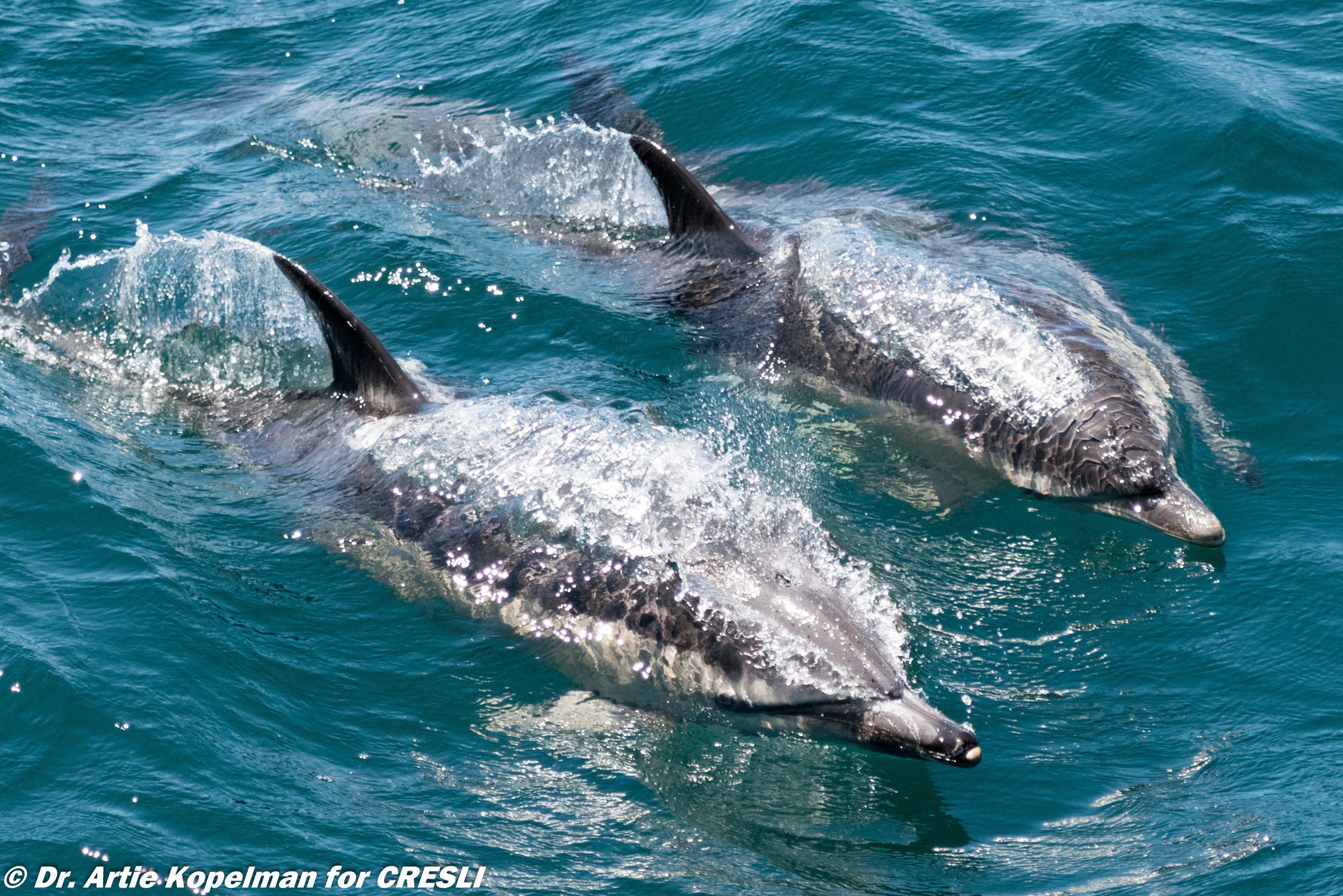 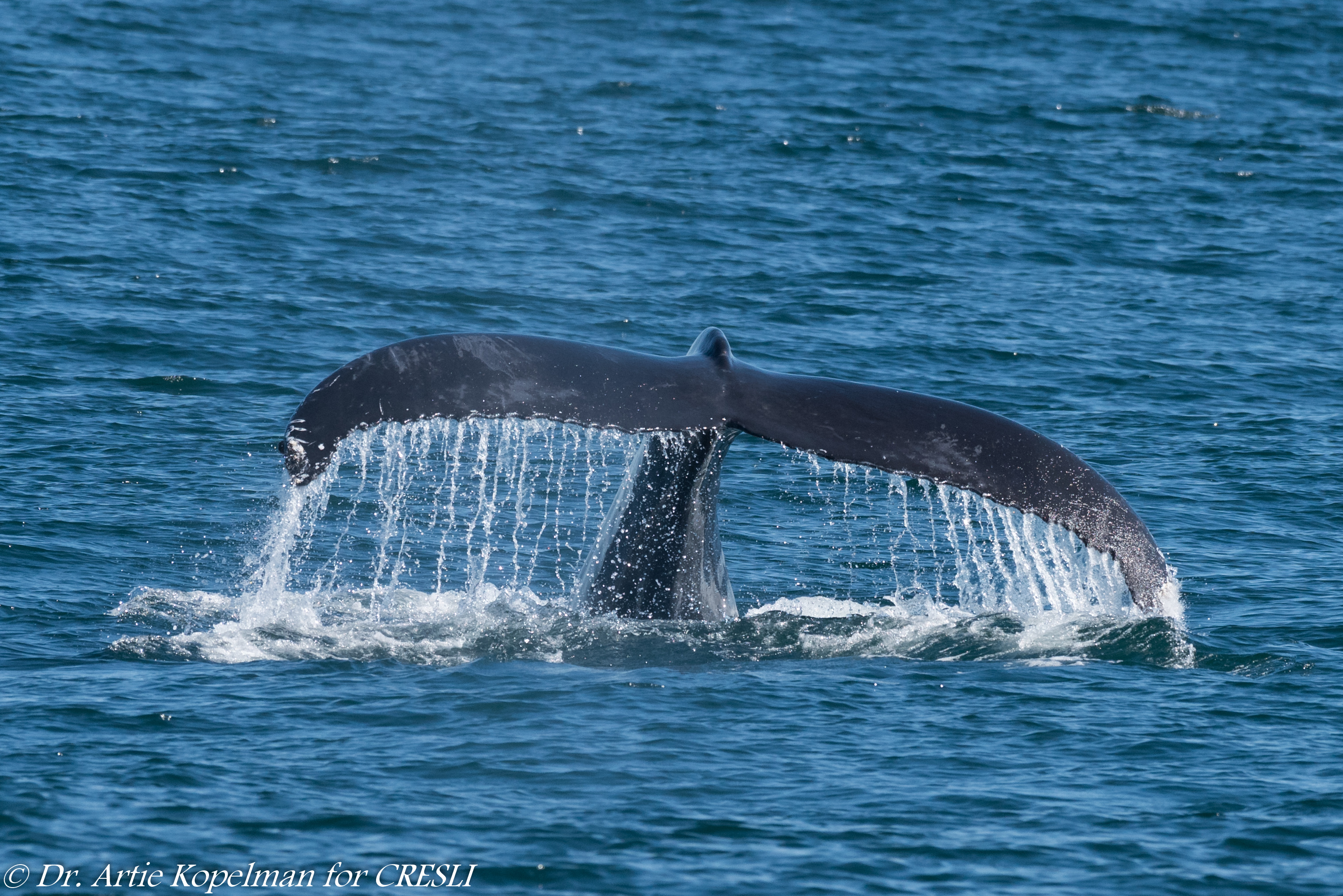 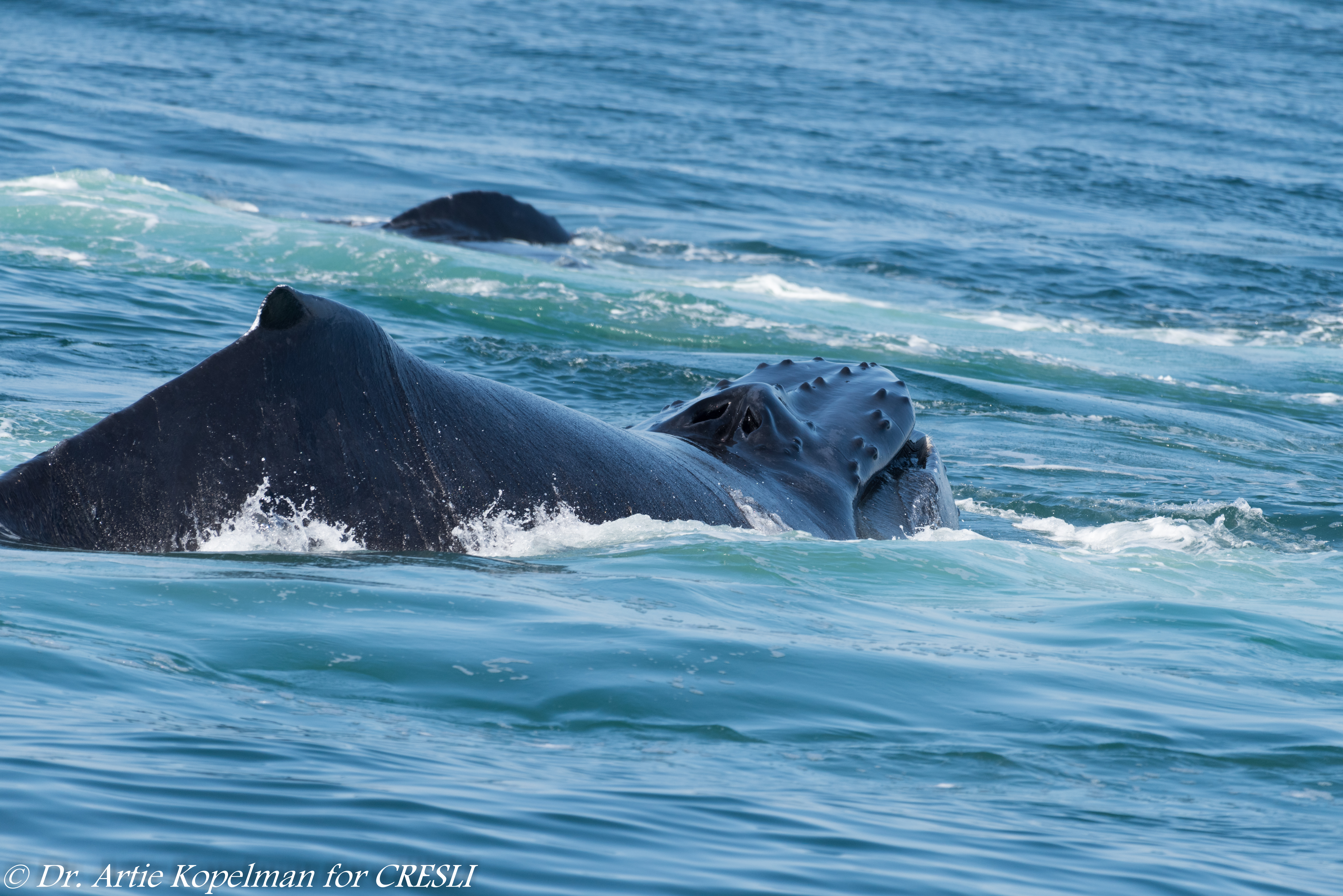 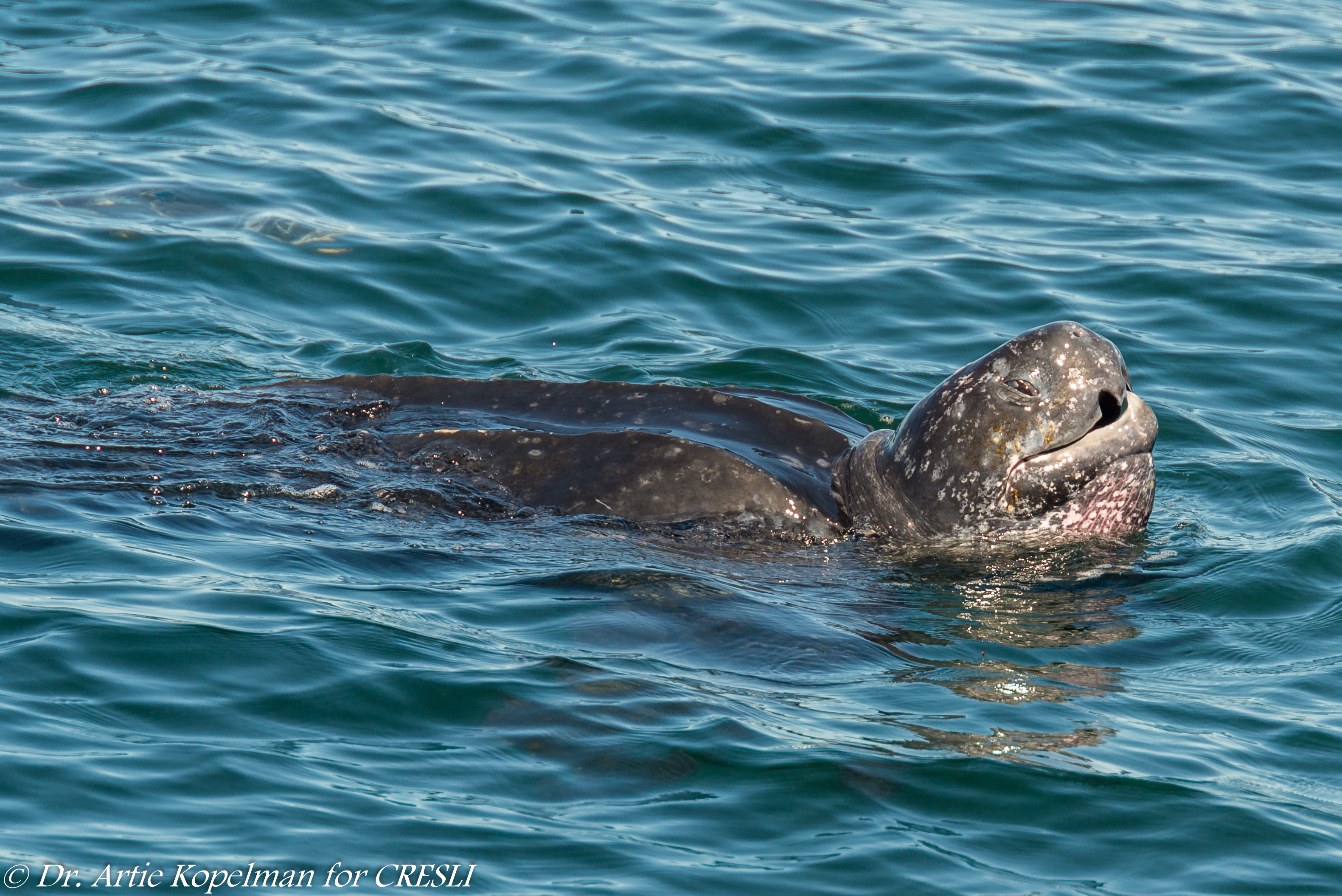 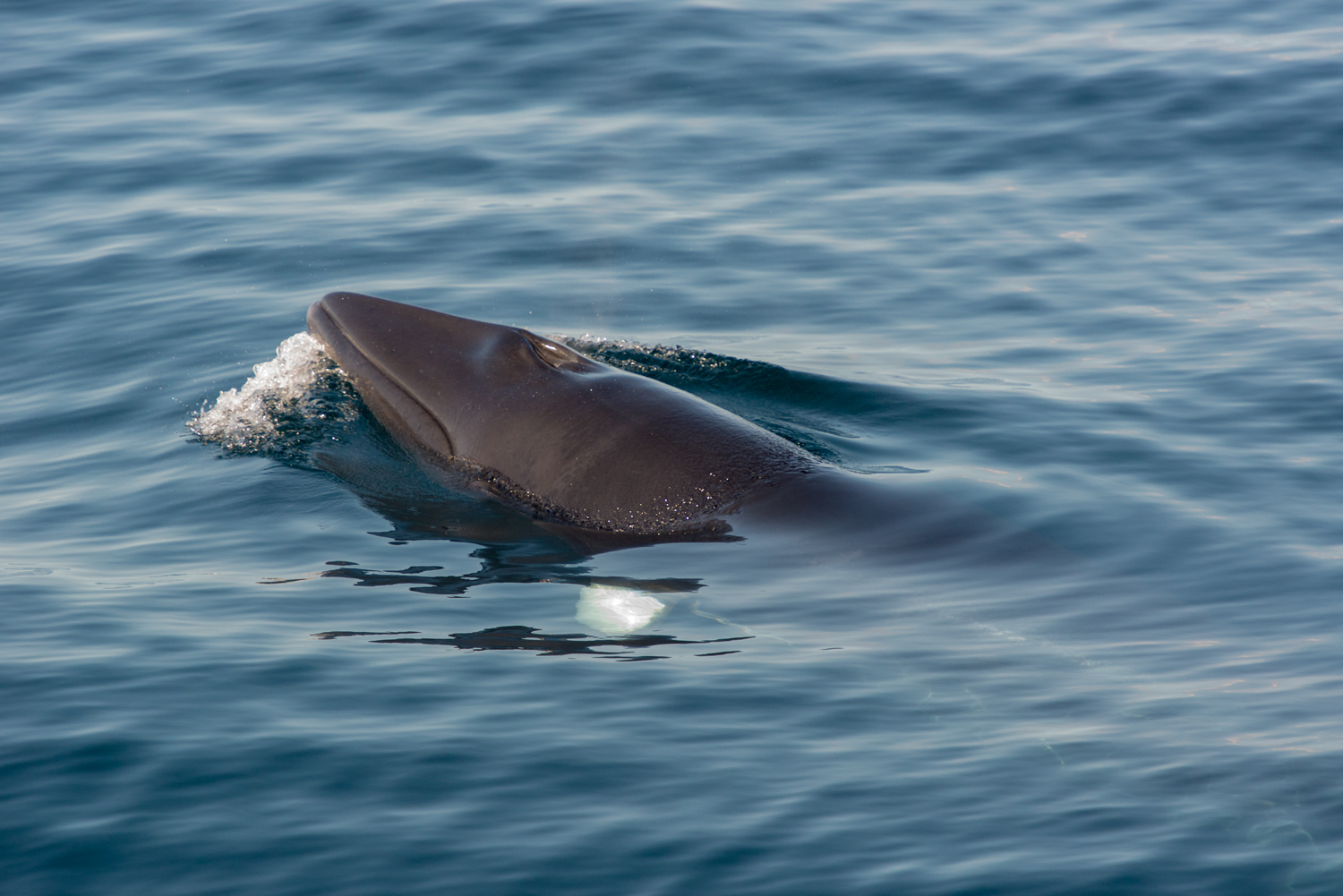 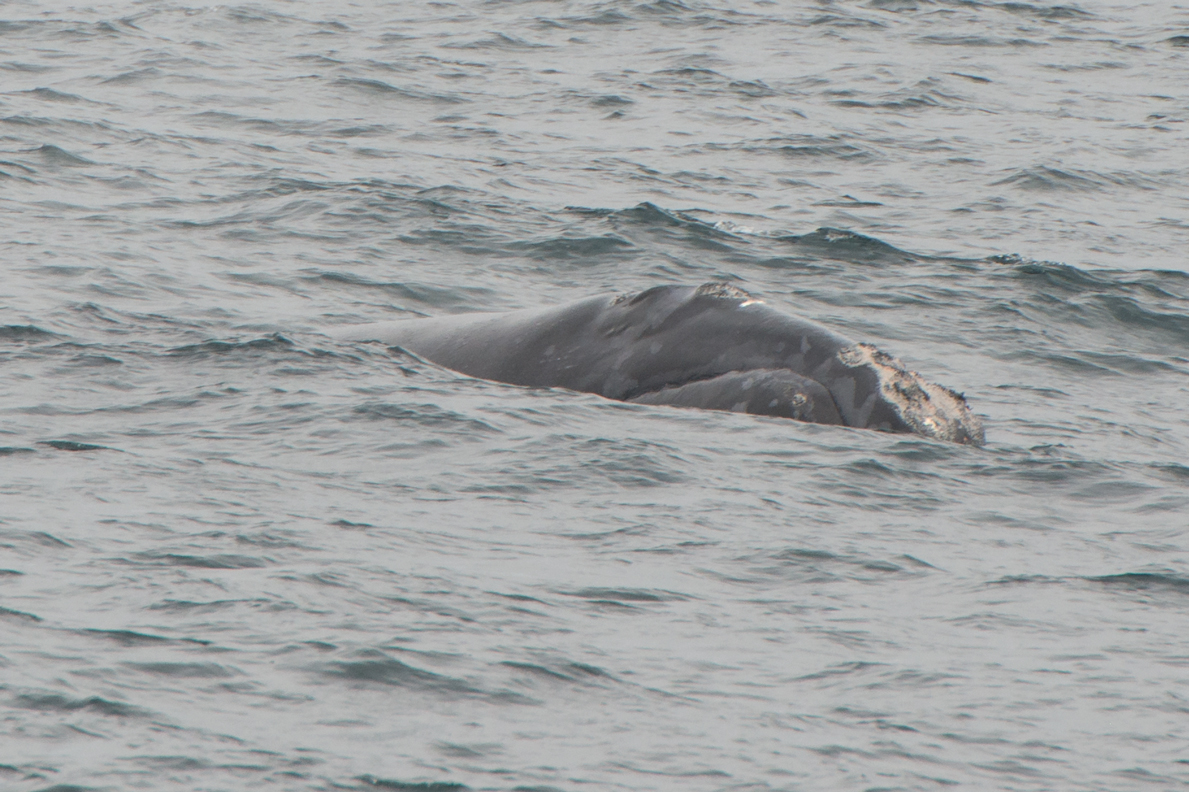 Large whales can be found year-round in the waters of the New York Bight, which is in the migratory pathways for several endangered and recovering species. Information on whale distribution and behavior in the New York Bight could be improved, and baseline and more in-depth information is needed for management and conservation planning, especially in the context of growing concerns about the impacts of ship strikes, entanglements and planning for offshore wind energy. Here we present 463 humpback and 1348 fin whale previously unpublished records, spanning between 1981 and 2014, collected from whale watching operations in the New York Bight. Sighting positions were used to model the spatial patterns of occurrence as a function of static (depth, distance from coast, distance from 200m isobath) and dynamic (Chlorophyll a concentration, sea surface temperature) environmental covariates, using boosted logistic regression trees. Modeled distribution for both species' was mostly explained by static variables with some contribution from surface temperature for humpback whales. Predicted humpback whale distribution was more coastal than for fin whales. To allow the spatially explicit assessment of the risks to whales from anthropogenic activities we overlaid the modeled whale species' distribution maps on the spatial distribution of potentially impacting anthropogenic activities such as shipping intensity, fisheries activity and renewable energy developments. An index combining the modeled whale spatial distribution and spatial distribution of anthropogenic activities was calculated and results are discussed in the context of marine spatial planning for the New York seascape.

The incidence of bent dorsal fins in free-ranging cetaceans

Laterally bent dorsal fins are rarely observed in free-ranging populations of cetaceans, contrary to captivity, where most killer whale Orcinus orca adult males have laterally collapsed fins. This topic has been poorly explored, and data/information on its occurrence and possible causes are limited. The present study: (i) undertakes a review of the available information on bent dorsal fins in free-ranging cetaceans, and updates it with new records, (ii) reports on the proportion of bent fins in different study populations, and (iii) discusses possible causes. An empirical approach based on bibliographic research and compilation of 52 new records collected worldwide resulted in a total of 17 species of cetaceans displaying bent dorsal fins. The species with the highest number of records (64%) and from most locations was O. orca. On average, individuals with bent dorsal fins represent < 1% of their populations, with the exception of false killer whales Pseudorca crassidens and O. orca. While line injuries associated with fisheries interactions may be the main cause for P. crassidens, and the vulnerability to health issues caused by the evolutionary enlargement of the fin may be the cause for O. orca adult males, factors contributing to this abnormality for other species are still unclear. The occurrence of bent dorsals could be influenced by a set of variables rather than by a single factor but, irrespective of the cause, it is suggested that it does not directly affect the animals’ survivorship. While still rare in nature, this incident is more common (at least 101 known cases) and widespread (geographically and in species diversity) than hypothesized, and is not confined only to animals in captive environments. Investigation into the occurrence of bent fins may be an interesting avenue of research.

Cetacean research has historically been limited in the New York Bight apex (NYBA), which includes the Port of New York and New Jersey and adjacent waters. However, increased sightings, documented mortalities, and high levels of commercial and recreational activity suggest the need for a better understanding of humpback whales in this area. Opportunistic sightings and photo-identification data of 54 individuals identified from 2011-2016 were used to determine occupancy, occurrence, and annual return. Photographs were also shared with regional and basin-wide catalogs to determine the origins of these individuals and their exchange with other areas. Mean occupancy length in the NYBA was 30.5 days, mean occurrence was 2.3 days, and mean rate of return was 39.1%. Individuals sighted in the NYBA had histories in the greater New York Bight area (Cape May, NJ and Montauk, NY) and in the greater mid-Atlantic region (Virginia). There were also matches to primary feeding grounds, including 36% (n=18) to the Gulf of Maine and 2% (n=1) to Newfoundland. Sighting records suggest that most individuals were immature when seen in the NYBA. There is currently no evidence of within-year movement between the NYBA and primary feeding grounds. However, there were within-year sightings with both Montauk and Cape May suggesting that individuals may utilize the entire New York Bight during the feeding season. The NYBA may be of increasing importance to juvenile humpback whales as a supplementary feeding ground.

Distribution and occurrence of large whales in New York Bight prior to 2017: establishing baselines and informing management

Abstract for World Marine Mammal Conference 2019
The New York Bight is one of the busiest waterways in the world, where industries such as shipping, tourism, fishing and renewable energy development coincide with a diversity of marine wildlife. Large whales have been sighted with increasing frequency in recent years, yet detailed information on species distribution, required for effective management and planning, remains scarce. With growing conservation concerns, a synthesis of large whale sightings data from 1998 to 2017, including published and unpublished data, was conducted. MaxEnt species distribution models were constructed for two commonly sighted species: fin and humpback whales. A total of 211 fin and 228 humpback whale sightings were used in the analysis. Bathymetry, distance to shore, slope of the seafloor, sea surface temperature, chlorophyll-a concentration and zooplankton biomass were included as covariates. Zooplankton data, a proxy for foraging potential, were only available for waters within the 1000m isobath, thus two models were run for each species: the first included all covariates for waters less than 1000m; the second included all covariates except the zooplankton data for the entire study extent. Areas with high probability of presence were largely coastal in both fin whale models, with low probability of presence past 1000m. Humpback whale models identified high probability of presence near New York Harbor and areas along the 1000m isobath. Distance to shore and chlorophyll-a concentration contributed most to fin and humpback whale models, respectively. Inclusion of zooplankton data appeared to influence the probable distribution of both species as a result of patches of relatively high zooplankton biomass. Results also highlighted areas of anthropogenic overlap with whale occurrence, including potential offshore wind energy areas. These results provide valuable baselines to inform future research and monitoring efforts, and the development of best management mitigation practices that may minimize impacts to whales in the New York Bight.
Geospatial Analysis of Cetacean Distribution and Habitat Utilization Related to Prey Density and Sea-Surface Temperature off the Long Island, New York Coastline by Jared Bergen (Sayville High School)

Knowledge concerning the distribution of cetaceans in the northeast Atlantic Ocean is limited; information pertaining to cetacean population patterns over time off the coastline of Long Island is even less well understood. Geospatial analysis of data compiled by the Coastal Research and Education Society of Long Island (CRESLI) beginning in the 1980s through the present may prove useful in providing a clear picture of general population and distribution trends over time. The dissemination of information regarding how and why cetaceans utilize their offshore Long Island habitat is much needed as various environmental management issues emerge, such as an Alternative Energy Management Plan for offshore wind turbines that has recently begun its first stages of construction, along with entanglement and boat strikes which are common further north and west of this study location.  CRESLI data, for the years 1989-1995, 1997-2000, and 2009-2015 was used for this study and analyzed geospatially using  ESRI®’s ArcMAP Version 10.3 and spatial statistics tools for cetacean count, sea-surface temperature, prey density, and observation of calves over time.  The observations were for a cruise track area of approximately 300 square miles located south of Montauk Point, Long Island, New York. The data were transcribed from ship logs into Excel, added to ArcMap as X-Y data, and projected to NAD83 UTM Zone 18N. Geographic distributions were analyzed using spatial statistics tools including mean center and standard deviational ellipses to determine where cetaceans and prey shifted annually and how those features were oriented over the study period.  Patterns were identified using the average nearest neighbor and Ripley’s K-function to establish whether the cetacean counts and prey density were clustered or dispersed.  Additionally an optimized hot spot analysis was conducted to identify whether hot spots for high cetacean counts overlay hot spots for high prey density over time.  A multivariate grouping analysis was conducted to determine which feature was a statistically significant factor for cetacean count by cluster. The results suggest that cetacean clusters have shifted annually, are oriented southwest-northeast, and that both cetacean counts and prey density by location are clustered and do not occur by chance.  Calves are associated with high prey density hot spots. Some clusters of cetacean counts by region are more influenced by sea-surface temperature, while others are more influenced by prey density and sea-surface temperature combined.  Over 260 cetaceans have been observed utilizing the habitat within the Deepwater Wind energy location off of Block Island. These results are important to better understand where cetaceans utilize habitat for foraging as adults and with calves throughout the New York region and how they are connected to the Gulf of Maine stock as 14 adults and 2 claves from that group have been confirmed in this study location. As 3/13 great whale species in this group are classified as endangered/ vulnerable, it is important to understand their distribution to best protect their habitat range and migratory corridors in the future

Observations of feeding and ventilatory behavior of individual fin whales (Balaenoptera physalus) were made from various vessels during the months of May - September, 1981-87, in the waters off eastern Long Island, N.Y., U.S.A..  Intervals between blows were measured and recorded to the nearest second.  Information about behavior was recorded, as were location, depth, and surface temperature at sounding dives.  Animals observed feeding at the surface were noted as such, all others were considered non-surface feeding.  Data were compiled by individual, month, year, and analyzed for mean interblow interval during surface activity bouts; mean dive duration; and overall mean blow interval.

Surveys of fin whales, (Balaenoptera physalus) were conducted during the months of May through September, from 1979 through 1996, off Long Island, New York. Surveys primarily occurred aboard whale watching vessels. When possible, individual identification photographs were collected on the cruises. Photographs from 1981 through 1988 were compared for matches of individuals based upon the technique described by Agler et al. All identification type photographs were entered into a computer database to facilitate a more rapid matching of individuals. Animals were keyed into the database based upon dorsal fin type, chevron, and/or nicks and scars. Initial matching was based upon these features. Final matches were made by manually examining each slide and matching at least 5 major features for each whale.

Individual fin whales were found to occupy the region on a recurring basis over numerous years. In some instances occupancy was repetitive on an annual basis, while in other instances gaps of one or more years occurred. Individual fin whales were found to occupy the region for a period of up to 9 weeks, however, many animals were not photographed on a continuous or daily basis. This may not be indicative of movement from the area as surveys throughout the entire occupancy area were often not possible aboard the platform vessel. Residency diagrams presented with this study demonstrated a clear preference to return to the region over a period of years.

The resighting rate indicates that a significant number of animals seen annually in the region were previously sighted individuals. Based upon the high resighting rate and the long term annual recurrence of individual fin whales, this area may be a significant seasonal residency site. However, animals were not always seen in the same areas either within one year or over a period of years. Resightings of whales indicate a use of the whole area and not a specific trend to one site. Consequently, movement throughout the area would be expected based upon our analysis